Close by the warfront in Adamas stands the old church of the Holy Trinity, housing the Ecclesiastical Museum of Milos. The museum includes a large part of the centuries - old artistic heritage of Milos. It contains icons and wood - carvings echoing the financial prosperity of the island under the Venetian rule, and votive offerings of Melian migrants to Russia.

The church itself, in the style designated by experts as a "cross - vaulted, three - nave basilica with a vaulted dome" is a vey interesting architectural monument.

Over the centuries, it underwent over several renovations, including a major one during the Frankish rule, witch left a particularly striking mark on the architectural structure.

In addition to its function as a place of worship, the church also serves as an exhibition area, displaying a large number of works from the religious artistic tradition of the island: it includes 14th c. icons, e.g. a rare one of the Cretan school representing Christ's body being taken down from the Cross, and several paintings by Emmanuel and Antonios Skordilis, the Cretan painters who started a brilliant career in Milos from 1647 onwards and created a new style in post Byzantine painting. In addition to icons there are fine examples of "epitaphios", wood - carved lecterns and icon - stands of the 17th c., a bishop's throne and iconostases of the same period, silver chalices and censers of the 18th c., gold votive offerings, such as rings, necklaces, ear - rings a.o., all attesting a high artistic level while conveying a flavour of local religious folklore.

The rare architecture of this church, in combination with the sacramental items it contains, are apt to appeal to the visitors emotions, not only as tokens of Orthodox worship and tradition but also as superior works of art.

Close by the warfront in Adamas stands the old church of the Holy Trinity, housing the Ecclesiastical Museum of Milos. 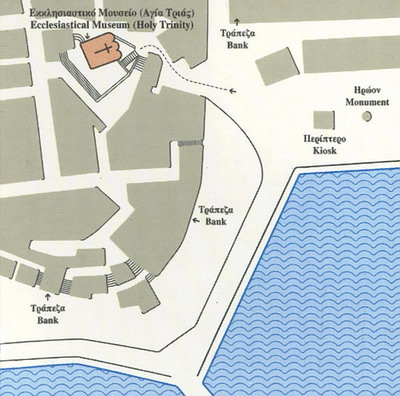 On the hilltop dominating the village, there is a more recent (inaugurated 1870) and larger church of double dedication and named accordingly Dormition of the Virgin and St. Haralambos. Also this church (commonly referred to by its second name) contains excellent icons by the Skordilis painters and displays a highly elaborate iconostasis of the 17th c. moved from Palaea Chora (Zephyria) when the old capital of the island was abandoned by its inhabitants in the late 18th century. A visit to that church will enrich a visitor's insight into Milos artistic creation in the 17th - 18th centuries.

Further insights are naturally be gained by visiting the other churches of the island, in witch many important items, icons and hairlooms of the last five or more centuries are kept. Special mention must be made of the church of Plaka dedicated to the birth of Virgin but commonly known as "Panagia Korfiatissa", and the church of Tripiti dedicated to Agios Nikolaos.