The Gyzi Megaron Cultural Centre was founded towards the end of the 70s with the initiative, the financial support and contribution from the Catholic Diocese of Thira, which in this way wished to continue a cultural tradition going back many centuries by the Catholic community of the Cycladic area. For this reason the Catholic Diocese restored, maintained and granted the Cultural Centre to Gyzi Megaron one of the few remaining historical mansions dating back to the 18th century which belonged to the Venetian family Gyzi.

Within this ideally suited environment, the Cultural Centre has developed its activities, more and more intensively over the years, seeking to approach the Thirions of today and also visitors to the island, on the one hand the Greek cultural heritage and on  the other the modern spiritual and artistic movement, both Greek and foreign.

With cultural events which cover all ranges of artistic creation all year round such as:

With established events such as:

With book publications of historical, folklore and art content.

With the possibility of actual recordings and by extension the issue of digital music discs.

With the creation of the Gyzi Megaron Museum in which exhibits are displayed  (documents, paintings, photographs and various other artefacts) which enlighten significant sources of the tempestuous history of Santorini from the Venetian domination to present day thanks to the priceless archives of the Catholic Diocese of Thira.

The Gyzi Megaron Cultural Centre is ambitious to harmoniously couple the culture and the history of one of the most beautiful islands on earth.

The Gyzi Megaron Museum is situated in the Halls of the Cultural Centre, where six permanent collections are hosted:

The Gyzi Megaron Festival, a summer cultural celebration, which has now been established as an ordinance in the events of Santorini, upgrading its cultural life and attracting both the inhabitants and the multitude of visitors to this popular island.

It was far back in the summer of 1981 when Tereza Kokkalaki, a representative of the members of the Gyzi Megaron Cultural Centre, had the idea of establishing the artistic events every year in August. For 25 years and up to 2006, she was responsible for the organisation and literally the soul of these events, inviting significant artists both from Greece and abroad, placing this little island on the artistic map. These events stood out from their commencement for their distinguished aesthetics and warmly embraced an audience of art lovers. Beyond its natural beauty Santorini managed to offer enjoyment and exaltation.

From September 2006 up to January 2015 artistic management was taken over by Giannis Papaconstantinou, an art lover and collector with the aim of not only continuing this cultural offer , but  also to widen the already high class level of the events giving a new force  to these and  generally to the cultural philosophy of the Spiritual Centre. From 2007 the Gyzi Megaron Festival was institutionalized, a festival which is now also becoming well known abroad extending its ties also to modern forms of art. The festival started to become internationally recognised thanks to the actions of Giannis Papaconstantinou, it was chosen in 2015 to receive the certificate of recognition EFFE – Europe for Festivals, Festivals for Europe. This is a new program which has as a target the creation of a cultural gate which includes information for professionals and for the citizens of the E.U. for the best festivals which take place in Europe, as well as awarding innovative artistic festivals for their great contribution to European and local cultural life. It should also be noted that from the year 2008 Santorini, by means of the Gyzi Megaron, joined the network of the European Celebration of Music.

From September 2015 the management of the Gyzi Megaron Festival is under the direction of Konstantinos Grigoriou, composer and director of the National Conservatory of Santorini. Together with the musician Giorgos Roussos their aim is the reconfiguration of the events mainly the enlargement of the music repertoire so that there are events for every kind of music preference for the multitude of visitors. With the assistance of the Catholic Diocese of Thira the music events can also take place in the historical temples of the Catholic community, something which means that for the very first time large musical ensembles can be invited. Since 2017, two big collaborations have been inaugurated, with the oldest orchestra of Greece, The Athens State Orchestra, and with Musical Ensembles of ERT (Hellenic Radio and Television), and for the first time in history, under the auspices of the Greek Ministry of Culture and Athletics.

Finally we must note that all of the events in the festival are free of charge for both the inhabitants and the visitors to the island, Greeks and foreigners,  entrance is always free thanks to the full support and financial assistance of the Catholic Diocese of Thira. The communication sponsors include The State Television Organisation (ERT 1, ERT 2) and radio stations (2nd Programme, 3rd Programme, KOSMOS Radio), along with the TV channel of the Parliament of Greeks. The sponsors of the leaflet are the newspaper KATHIMERINI, the magazine Onboard BLUE of Aegean Airlines, and the annual magazine GREECE IS. Network sponsors in addition to the previously named are CultureNow.gr, tar.gr, Beton7 Radio, Pepper 96.6 and art&life.

Over the first decades of the development of tourism in Santorini (1970 – 2000) the tourist season was strictly the seven month period from April to October. As a result all artistic movement was limited to the summer months unfortunately leaving a culturally deprived winter season.

Those years the curtain of the artistic events in Santorini was called by the Amateur Stage of Athens, which was founded and directed for 70 years by the unforgettable Thirean artist Ioannis Alexakis, and who every year on the 28th of October gave theatrical performances at the Gyzi Megaron presenting works of the classical repertoire, always with great attendance by the locals in Santorini.

At the start of the 21st century the extension of the tourist season to all year round, and the multitude of cultural institutions and associations founded and activated in Santorini, have changed the cultural events for the better.

The art direction of the Festival of Gyzi Megaron aimed,apart from the recognition and enlargement of the summer festival, towards the establishment of cultural events all year round. For the first time from the period 2016 – 2017, the events continued during the winter season, resulting in a cultural pole of attraction and a cultural core for the very inhabitants and the children of Santorini.

The collaboration between the Municipality of Thira and the organisation Δ.Α.Π.Π.Ο.Σ  (Winter Events    2016 -2017 and 2017 – 2018) lead to the accomplishment of at least 50, to date, events of the highest level ,with free entrance, which included all kinds of music, theatrical works,  performances for children and even opera performances.

The events take place in the renovated hall of the Gyzi Megaron, and in the evocative Cathedral of St. John the Baptist.

HOW TO FIND US 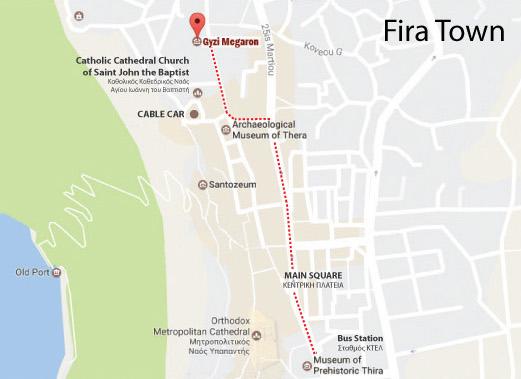 Category of business :
Museums ,  Other
Other category (Cultural Events - Festival)